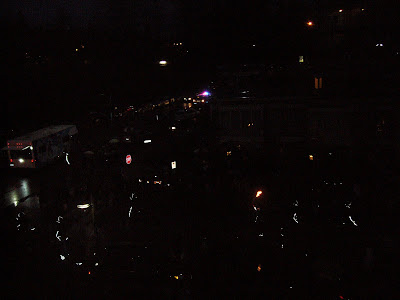 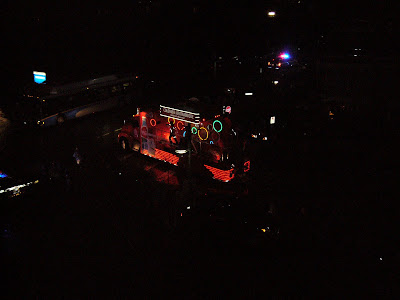 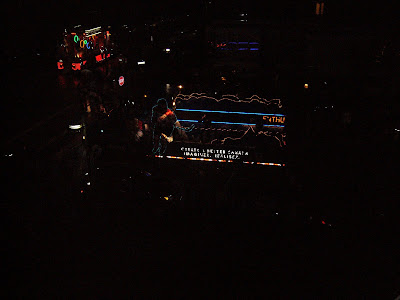 The day before the Olympics opened, I watched the torch relay at Myrna's place. It was warm and cozy. Myrna made coffee and cinnamon buns. I brought some sugar mandarins and a couple of mangoes. We stood on her 3rd floor balcony and watched the crowd below. We waved Canadian flags and cheered the torch runner as he passed along the street in front of Myrna's place. It was very cold and rainy out, but a couple hundred people were in the street. Everyone seemed to be good spirits. It was just after 7am and still quite dark out, so you can't see much in these photos. The vehicles are part of the entourage. The dark shot with a blob of light is the actual torch.

I found out later that each torch has enough fuel to last about 20 minutes before it burns out. Somewhere back east, the torch did blow out twice on a particularly windy stretch of highway. A backup flame, taken from the Olympic flame in Greece, is kept lit in the torch bus, so a blown-out torch can be re-lit with the real thing. I began to think about what would happen if someone messed up and let the backup flame burn out, then the torch burned out. Would the flame keepers admit it? or would they whip out a zippo, relight the flam and act like nothing happened?

I also learned that runners get to keep their torches, but they have to pay if they want to keep them. A lot of people carried the torches, and the flame was relayed through a lot of cities in Canada. In the last few days before the Olympic opening ceremony, the torch relay took a loopy route all through the Fraser Valley and Metro Vancouver, so lots of people got to run with it, and to see it.

I'm glad I saw the torch. It was a brief encounter, but one I probably won't experience again. I'm glad it didn't blow out or get doused by the rain. I'm glad there was coffee and cinnamon buns, and mangoes, definitely mangoes.

question: did you see the torch?

mompoet - usually staying lit more than 20 minutes at a stretch
Posted by mompoet at 8:43 PM

hey there, about the torch going out twice. that was in port elgin onatrio both times. i know i'v heard all my life that highway 21 was one of the worst highways in ontario but i guess this just prooves the power of those winds comming off lake huron. i was in southampton to watch it and boy was it a mess outside. but of course the flame did keep 5,000+ people warm.