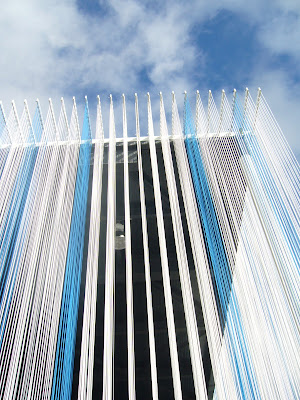 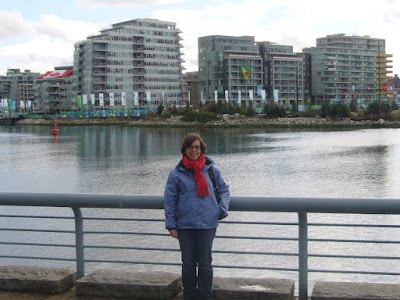 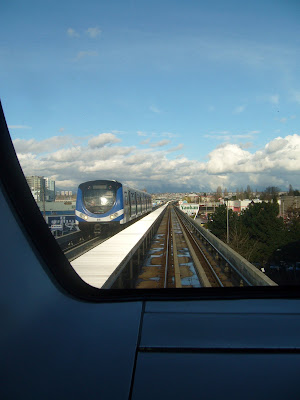 Andy and I both had a day off work Thursday, so we went downtown to see a few more things - our first Olympic day just us two.

We walked from the Main Street skytrain station to the lineup for the Ontario Pavilion, where we waited for about 90 minutes to get into the "4D" theatre experience. It was a movie about Ontario in 3D, with vibrating seats real snow, water splashes and squirts of fragrance (pine forest, hot chocolate) to make the experience seem almost real. It reminded me of the movies at Expo. It was beautiful and fun but pretty gimmicky. I'm glad I saw it, though. It's been a while since Expo.

After we explored the Ontario pavilion, we walked along the False Creek seawall to Yaletown, then up Cambie into downtown. We got a free sample of Vitamin Water and visited the Bell Ice Cube. There, they give you a set of earbuds so you can plug into the audio for one of dozens of giant screen TVs showing the three different Olympic broadcasts all owned by CTV, that simultaneously show the various events going on in Richmond, Vancouver, Cypress Bowl and Whistler. They also have smaller screens showing the history of the Olympics, you can plug into those two. That was kind of neat.

We looked at the lineup for the Canadian Mint and decided not to go. It was probably about 4 hours long. I would have liked to hold a real Olympic medal, but I guess I won't. We checked out the zipline lineup, knowing we planned to return early to ride the zipline the next day. At 11:30 in the morning, it was 8 hours long.

Next, we got on the Canada Line and traveled to Richmond's "O Zone," to check it out. The family activities (outdoor skating and entertainment stage) weren't open until 3, so we visited the Holland Heineken House pavilion. The displays there were quite engaging, and we could have totally outfitted ourselves in orange Holland team/fan gear, but we didn't. We did visit the beer and food hall. We discovered there that the first step is to exchange money for a charged up cash card (which you can cash back out if you have money left on it when you leave). We got some beer (Heineken, of course) and ate lunch. I had "kale and potato hotchpotch with sausage." Andy had the same except sauerkraut instead of kale. It was a cardboard cone filled with big scoop of mashed potatoes with kale (mine) or sauerkraut (Andy's) mixed in, topped with crisp bacon sprinkles and a half a sausage stuck in quite jauntily. These were $7.50 each (tax included), and quite filling. The same size beer that costs $8 at BC Place was just $4.50 a glass at Heineken House. We milled about with the crowd and watched a bit of skiing on the big screen while we enjoyed our lunch and beer. Of all the Olympic venues we have visited so far, Heineken House is the the most friendly and laid back. We liked it.

By this time we had enjoyed enough Olympics for one day, so we took the Canada Line and the Skytrain home. We stopped at the produce store on the way, so we're stocked up with good stuff. We were home in time to catch the 2nd and 3rd period and see the Canadian women win gold. Hurray!

question: what's the nicest place you have visited during the Olympics? (hint, it doesn't have to be at the Olympics - it could be far away on purpose

mompoet - the sky was bluer today that anyone expected
Posted by mompoet at 2:06 PM