friday night in the camp kitchen

My friend Linda gave me 3 hearts of romaine lettuce. I thought, "romaine lettuce makes Caesar salad, and Caesar salad is Alex's favourite." I felt slightly guilty, because Linda calls Caesar salad, "cheater salad," because it is often so high in fat and sodium that it is not a healthy salad at all, but an unhealthy treat. I proceeded to make a Caesar salad that I don't think anyone would call "cheater." It took a few more steps than usual in my camp kitchen, but it was worth the effort.

I grew up eating only home-made bread. Buying bread was a new adventure for me when I moved away from home. Thirty years later, I make bread at home once in a while, but I mostly buy it. I think it's okay, because I buy healthy, whole grain bread. Caesar salad is a "bread salad," because it contains croutons, which are made from bread. I make my own croutons every time I make Caesar salad, because only home-made croutons are tasty and healthy enough to be worth eating. Store-bought croutons are hard, and tiny and very salty and yukky. Home-made croutons are easy!

I took 2 slices of whole grain bread and cut them into cubes. I melted a Tablespoon of butter and mixed it with some garlic oil. If I had been working in my full kitchen, I would have used fresh garlic. I drizzled the butter over the bread cubes in a large bowl, and tossed the cubes to coat them with the garlic butter. Then I put the cubes on the pan in my toaster oven, and baked them for a few minutes until they were golden, fragrant and crispy. Now those are some croutons!

In the meantime, I thawed out some boneless, skinless chicken breasts. I sliced each breast half in half again to make it fairly thin, so it would cook more quickly. When the croutons came out of the toaster oven, I put the chicken breasts in. A sprinkle of Montreal chicken spice on top was all the seasoning they needed. I baked the breasts for about 20 minutes, just until they were done. They didn't brown up, like they would in a skillet with olive oil (my favourite way to prepare chicken to top a salad), but the Montreal spice gave them some colour and texture.

While the chicken cooked, I washed and tore up the lettuce leaves. I used the same bowl that I had used to mix up the croutons, thus saving on dishwashing. I used bottled dressing, but just the tiniest bit. If I had more time, space and cookware, I would have concocted my own dressing, but it was Friday night in the camp kitchen, so bottled it was. I tossed the lettuce thoroughly with the dressing, and added the croutons (saving some for Alex, who had, alas, already left for work). Then I arranged the salad on two large plates and topped it with grated parmesan cheese, fresh-ground black pepper, and slices of the baked chicken breasts. 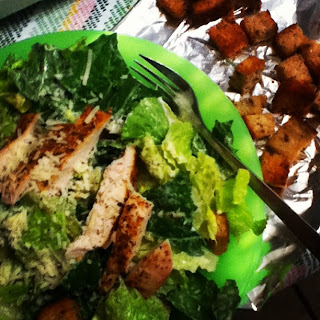 Oh my, it really was yummy. After supper, Andy washed the dishes (there weren't many really) in the laundry tub, and I dried them. Then we put the dishes away, and finished the bottle of Charles Shaw Merlot (aka Two Buck Chuck) that we had opened to accompany this fancy supper.

Saturday at lunchtime, I used the leftovers to make Alex his salad: more fresh romaine lettuce, a little dressing, and the croutons, re-crisped in the toaster oven because they really are good when they are still a bit warm, parmesan cheese, pepper, and sliced chicken, also warmed in the toaster oven. He ate his salade right from the big old bowl, thus saving me washing a plate. That's the fun thing about being the only one eating the Caesar salad, you get the whole bowl.

I am getting to be pretty good at this camp cooking business.

In renovation news, the drywall work is almost finished. The cabinets will be installed Wednesday and Thursday. Some time in between, Andy will finish adding tiles to the floor where the old cabinets came out, and I will paint the ceiling and Andy will paint the walls. In our spare time. YUP.

Good thing we have yummy camp kitchen meals to nourish us and keep our spirits up.

question: Is your Caesar salad a cheat? or a healthy treat?

Posted by mompoet at 8:50 PM No comments: