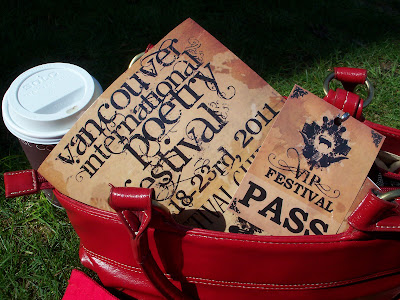 Do you ever discover a theme in your days that you had not planned? This weekend it was "Walking in Vancouver" for me.

Friday I enjoyed a couple of shows at the Vancouver International Poetry Festival. I saw the Haiku Death Match and the Sirens reading. Both were splendid. I was so happy to see my Poetry House friends, having been away from the organization for a year. They have put together a wonderful festival. I'm so proud of them! Attending the festival meant that I got to walk around East Vancouver's Commercial Drive neighbourhood. I stopped in at Turks Cafe to pick up a tea latte and a big cookie, and I sat on the lawn in front of the WISE hall, in the sunshine, and just enjoyed being there. It's a nice walk from the Commercial Skytrain Station up to the WISE, and it was a beautiful day.

Saturday, Andrew and I dropped Fiona off at work first thing, then drove to Granville Island. We did a bit of market shopping, then walked out the seawall to Kits Beach and back. Everyone and their dogs was running, walking, playing in the park. It was glorious. We saw a couple of sculptures from the Bienalle. (iiiinteresting! One looked like a disembodied stainless steel colon, extended across a big lawn). It was great to get out together and look at the water, the houses, the park, the people, and the big giant stainless steel large intestine.

Sunday I cooked, ate and watched the hockey game. No walking to speak of, although at church I ran with Mary Magdalene to the tomb. That was Sunday's exercise.

On Monday, Fiona practice-drove downtown to her voice lesson at supper time. I co-piloted. I had about an hour and a quarter to do something while she was in the studio. We had already stopped for coffee, and I had accidentally brought a magazine that I already read, so I walked. I went up from Gastown through the West End, along Robson for a bit, back along Davie for a bit, then through Yaletown and back to the studio. It was nice. Even though it was rush hour, it was very quiet. I think a lot of people had the day off work.

That was my weekend of walking in Vancouver. Nice, huh?

question: what was your theme in recent days?

mompoet - walk, walk, walk
Posted by mompoet at 6:41 AM No comments: 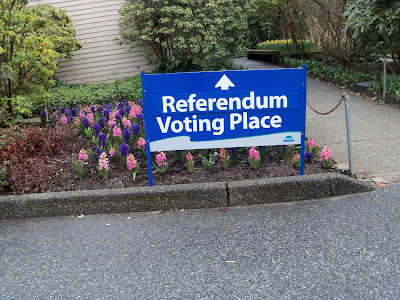 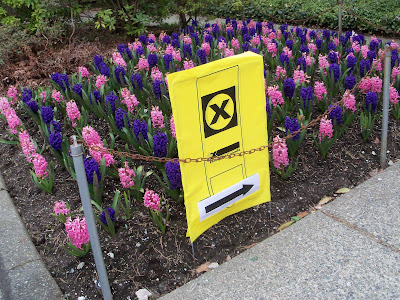 Vote early! Vote often! I know that's a joke, but it could be true for us these days. I have voted in the Port Moody Firehall borrowing referendum, the BC NDP Leadership election and in the advance poll for the federal election. The firehall and federal voting took place at Kyle Centre, as indicated in the photos. Leadership vote was online.

In the fall, we will have a civic election. There's even the possibility of a surprise provincial election, but less so, now that our new Premier has called a by-election in the riding where she hopes to secure a seat. Still, you never know.

Alex and I have continued our volunteer commitment to our candidate and MP, Fin Donnelly, in the federal election. Voting Day is Monday, May 2. (hint hint - VOTE!) For the first time in a lot of elections, I won't be volunteering all day long because I can't get away from the office. Never mind, I'll jump in at 4:30 wherever they need me. Counting the vote is the most exciting part, anyway.

question: are you voting early? often?

mompoet - on the voter's list, and making the most of each opportunity
Posted by mompoet at 6:33 AM 1 comment:

I haven't posted my blog for almost 3 weeks. All is well, I'm just totally preoccupied and tremendously distracted. I'll be back when life gets back to normal. No problems, just lots going on. I'll try to post a couple of small updates this morning. Stay tuned. May/June should be more blog-interesting.

question: what lurches you out of your groove?

We have a federal election in May. The last one was in 2008. Then, in our riding, we had a by-election in 2009. There will also be city elections this fall, and there are rumours of a provincial election. Add to that, leadership races for both of our major provincial parties, and when I bring up "the election" with people, they most often say, "which one?"

Oh yeah, there's a referendum this month in Port Moody about building a new Fire Hall.

I'm with everyone who is feeling a bit burnt out over all of these elections. But then I give myself a shake. They are elections according to the law and our system of government, and they are happening, like snow or chicken pox or puppies. Whether you wish them for now or not, you'd best participate. What if they threw an election and nobody showed up? The thing is, people do show up because it's our chance to have a say in who is representing us, leading us and taking care of us. And while I know it's not perfect, I am sure that we have a better deal in terms of leaders and systems of government than more than half of the rest of the world. We have a vote. Nobody kills us if we vote for the wrong person. For the most part it's fair and legal, with equal opportunity, and the person we elect does his or her best for us. Come on, it's not that much to ask that we wake up our brains, think about ourselves as a collective and consider our future and that of our children and vote.

So that's the background situation. Of course, I'm volunteering again. I'm supporting Fin Donnelly, our NDP MP, for re-election. Alex is helping out too. On Monday I walked door to door with Fin, and I followed up on Tuesday, putting out some lawn signs at houses where the residents said they would like a sign. I like Fin a lot as a leader and representative. He's smart and caring and authentic. He's done a good job in the House of Commons for us, presenting a half a dozen private members' bills already. He knows his constituents and his riding. In fact, he grew up here. We knocked on doors Monday where he knew the families from his elementary school days. Fin is a good listener and responds with intelligence and integrity to the things people say to him and ask him. He works hard for us and is connected to issues that affect our lives. Fin's best known for swimming all the way down the Fraser River two times, to draw attention to the need to protect the salmon and their river habitat.

As a campaign volunteer, I like door-knocking and election day best of all. It's exciting to be out and part of the effort to get votes, and I like getting to know the candidate. I have (in various other elections) also dropped fliers on doorsteps, gone door to door without the candidate, worked at the phone bank and participated in curbside sign-waving sessions. As one of the more "rah-rah" participants in the election, I have encountered the frustration of people who are unhappy about the intrusiveness of the campaign. I have spoken with people who are frustrated by numerous phone calls, including automated recorded messages, "Hello! This is Jack Layton!" "Hi, I'm Stephen Harper!" "Hello, this is Michael Ignatieff, I know you are eating supper, but I just thought I'd call you to say my mass-dialing auto call is more important than your family time."

I'm annoyed by those calls too. I wish that they weren't necessary, or there was some real way of making sure people who really don't want them aren't called, or that faithful supporters are peppered with too many too frequently. Still, I think that the future of our country, how we spend our money, whether we send our armed forces to this or that country, how we take care of the environment, how we care for the elderly, homeless children...those things are more important for just a moment, for just a few weeks, than my supper right now. And just think about it, how often do you get a chance to hang up on Stephen Harper?

Here's a good article about our riding of New Westminster Coquitlam Port Moody.

I know, it's tedious. It's annoying. It's expensive. It's an election. It's a privilege. Get over it. I'm telling myself that every day, and I do believe it.

question: what's up with you for this election?

I found this recipe in the Vancouver Sun a few weeks ago. This morning I was at Granville Island. The fruits and veggies were so beautiful, I was reminded of my intention to make the soup. I bought 3 kinds of mushrooms and brought them home.

Washing mushrooms is an interesting chore. I don't have a fancy mushroom-cleaning instrument, so I usually use a paper towel, which I rinse off every few wipes. I have read that it's not good to wash mushrooms with running water. I think that it wouldn't hurt the mushrooms, but it also wouldn't clean them very well. They do require some amount of rubbing.

The ingredient list for this recipe is simple once you have the mushrooms. Don't scrimp on the shitakes. They are expensive compared to the other types, but they are so good. They have some kind of a "snap" to them when you bite into a piece of one, and their flavour is really yummy. I have tarragon in my house, but it's not my favourite, so I substituted a splash of cognac for the tarragon. They are not equivalent, but the cognac-flavoured soup was awesome. I also subbed low fat plain yogurt for cream. I think it gave the soup a bit more zip, and a lighter consistency than with cream.

Heat the oil in a nonstick pan over medium heat. Prepare the mushrooms and cook one kind at a time until tender, about 5 minutes each, then set aside and cook the next kind. Cook the shallots along with one batch of mushrooms. Put all of the cooked mushrooms back into the pan. Mix in the flour and cook 2 minutes more. If the pan is big enough, leave them there. If not, transfer to a bigger pot (need not be nonstick) and put that one on the hot burner. While stirring, slowly mix in stock. Stir in the tarragon or the cognac, or perhaps both. Bring to a simmer and simmer 10 minutes. Stir in the cream or yogurt (but not both); season with salt and pepper. Heat the cream through a minute or so, and the soup is ready. If desired, serve portions of the soup garnished with sliced green onion or chopped parsley.

shitake spellchecks in blogger to Whitaker or shirker (or a swear word).

I will be eating lots of mushroom soup in the next day or so because I am the only one in my house who likes mushrooms. Even our dog refused to eat them, and I don't dare ask the cat.

Posted by mompoet at 6:18 AM No comments: